Pictured is Elizabeth Barwise in the middle against the tent along with three other nurses. She nursed at Netley Hospital in 1917 where she met her future husband Vincente Gutierrez and nursing him back to health. She eventually became the dispenser and midwife on the Isle of Wight living in Cowes. 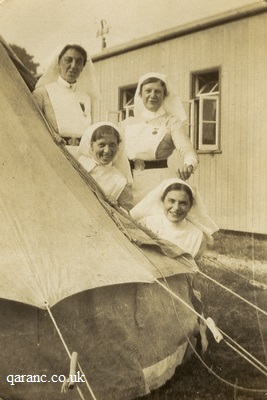 Little is known about the photo. If you can help with further information, such as the location or identifying the other ladies then please contact me.

There is a photo of Vincente as a patient on the Christmas Ward Hospital World War One page.