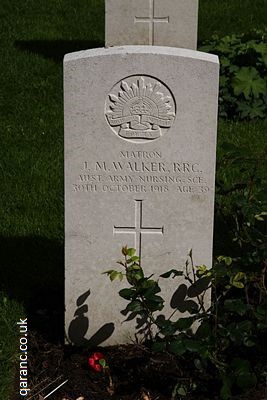 In some references she is also referred to as Jean Miles-Walker.

She was born at Hamilton, Tasmania on 16th November, 1878 to parents Alfred Miles and Louisa Mary Glover Walker (nee Wilkinson). Her birth was registered at Port Sorell, Tasmania as Jean Nellie Walker. (The date of birth recorded on her Attestation Papers was recorded as 16th November, 1879).

Jean Nellie Miles-Walker enrolled at the Collegiate School, Hobart, then trained at Hobart General Hospital from 1903-06.

"This is to certify that Miss Jean Miles Walker of Molong Private Hospital is quite competent in all branches of nursing (Being in charge of above hospital) & further that she is in good health & physically for active service. (Sgd Stratford Sheldon)."

Jean Miles-Walker was a 35 year old, single, Nursing Sister from Tongay, Culwalla Street, Hurstville, NSW when she joined the 2nd Australian General Hospital, Australian Army Nursing Service (A.A.N.S.) on 21st September, 1914 at Ismailia, Egypt. Her religion was Church of England & her next of kin was listed as her mother (father deceased) - Care of A. E. Walker, Tongay, Culwalla Street, Hurstville, NSW. Jean Miles-Walker stated that she had served with A.A.N.S. since 1906.

She was on Dardanelles Transport Duty - she returned & reported for duty on 12th December, 1915.

She joined 15th General Hospital at Alexandria on 4th September for temporary duty. She was "transferred elsewhere" on 25th September, 1916.

She embarked for U.K on Karoola from Alexandria on 25th September, 1916.

She was attached to 3rd Australian Auxiliary Hospital at Dartford on 5th October, 1916.

Nursing Sister Jean Miles-Walker was to be Matron at No. 3 Australian Auxiliary Hospital (A.A.H.) on 8th October, 1916.

She was to be Matron at No. 3 A.G.H. (Australian General Hospital) at Abbeville & reported for duty on 7th September, 1917.

She was posted to 5th Stationary Hospital at Abbeville for duty on 24th April, 1918.

She was attached to 2nd Australian Auxiliary Hospital, Southall for duty on 6th October, 1918.

A death for Jean N. Miles-Walker, aged 38, was registered in the December quarter, 1918 in the district of Warminster, Wiltshire.