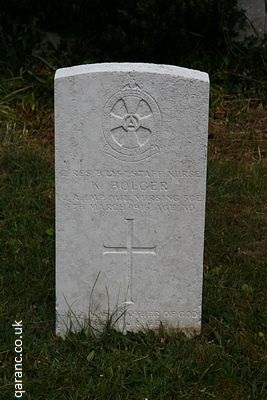 She was known as Kathleen and Katie as an adult, and this explains why her initial on her gravestone is K.

She joined the Queen Alexandra's Imperial Military Nursing Service (Reserve) and was given the service number of 2/RES/B/1257.

A death was registered in the March quarter, 1916 for Kate Bolger, aged 42, in the district of Warminster, Wiltshire.

Staff Nurse Katie Bolger was buried on 7th March, 1916 in the Churchyard of St. John the Baptist, Sutton Veny, Wiltshire - Grave Reference 411. South side of Church.

The Commonwealth War Graves Commission lists Staff Nurse Katie Bolger, 2/RES/B/1257, Queen Alexandra's Imperial Military Nursing Service, aged 30, as the daughter of Edward and Margret Bolger, of Tullow, Co. Carlow. (Note - Age at death according to CWGC is listed as 30 years old, however the details from the Register of Deaths lists her age as 42 years. Kathleen Bolger may have given a false age to get into the QAIMNS. If she was too old they would not have accepted her.)

The book The Carlow War Dead: A History of the Casualties of the Great War

by Tom Burnell has further information about her, and also gives her age as 30 and that she was Interred with Full Honours. Her father received a letter from Father Corcoran which is included in the book. It states that "Katie Bolger came to Suttonveny Military Hospital about four months ago, to take up the duties of Staff Sister, with the military rank of Lieutenant. Her bright and happy disposition soon made her a favourite, not only with the Matron and staff, but particularly with the patients, and her loss is greatly felt by all. She contracted pneumonia only a week ago, and although she received every care and attention, she passed away on Sunday evening last, fortified with all the rites of the Holy Church. As she had expressed a wish to be buried in the local Churchyard, her desire was acceded to. The funeral procession fell in at 10 o'clock, March 7th, in the hospital grounds, to proceed to Suttonveny Church." It continues to describe her funeral procession.

She is named on the Roll of Honour Tablet that is beside the Five Sisters Window in York Minster, York, England. More of which can be read on the war graves page along with photos.

She is also remembered on the QAIMNS Memorial in St. Anne's Cathedral, Belfast.

During the two world wars, the United Kingdom became an island fortress used for training troops and launching land, sea and air operations around the globe. There are more than 170,000 Commonwealth war graves in the United Kingdom, many being those of servicemen and women killed on active service, or who later succumbed to wounds. Others died in training accidents, or because of sickness or disease. The graves, many of them privately owned and marked by private memorials, will be found in more than 12,000 cemeteries and churchyards.

Sutton Veny (St John) Churchyard contains 168 First World War burials, 167 of them in a plot at the north west corner of the church. Of these, 143 are Australian. There is only one Second World War burial in the churchyard.


With thanks to Cathy Sedgwick, freelance writer from Australia.