Army Orders - May, 1949
090/2773 A.O. 66/1949
Alliance - His Majesty the King has been graciously pleased to approve of the New Zealand Army Nursing Service being allied to the Queen Alexandra's Royal Army Nursing Corps. (with thanks to Terry Hissey) 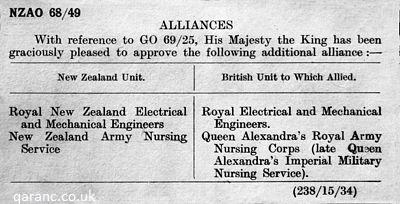 Read about the Royal Australian Army Nursing Corps Alliance or more history of the QARANC.