Nurse Dorothy Sugden of the Voluntary Aid Detachment was married to Private Spencer Sugden who served with the Federated Malay States Volunteer Force during World War Two. Nurse Sugden served at the 1st Malayan General Hospital and then was evacuated to Singapore following the fall of the Malay Peninsula. She was killed during a Japanese bombing raid on 9 February 1942. 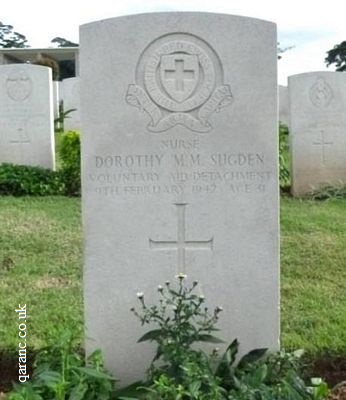 
She was buried at Changi cemetery. After the war she was moved and interred at the Commonwealth War Graves Commission Kranji War Cemetery where her husband is also buried. He sadly died three weeks after the Japanese surrender on the 23 August 1945.

There are six other women buried at Kranji War Cemetery which includes Sister Mavis Joy Jones.