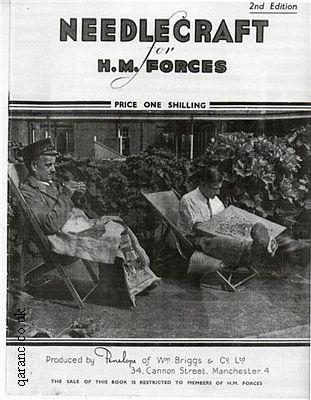 This Needlecraft for HM Forces booklet was sold to soldiers in military and civilian hospitals during the Second World War for one shilling. The embroidery patterns were produced by Wm Briggs and Co for HM Forces as a form of occupational therapy. These Briggs embroidery pattern packets sales of the book were restricted to members of His Majesty's Forces and were not sold to members of the public. 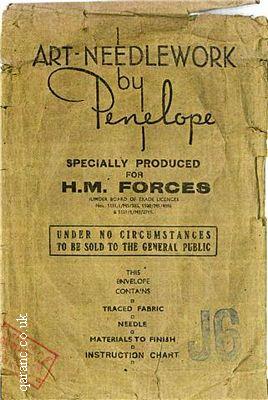 
Each envelope contained traced fabric, needle, material to finish and an instruction chart. The image below are the instructions and pictures of a Manor House and was design J6. There were many designs and patterns available and the Imperial War Museum has more of these.

A textile student at Northbrook College is researching the use of embroidery in WW2 and is seeking more information about needlecraft for HM Forces such as historical background, photos, reminiscences etc. She would also like to know if such schemes were implemented and whether they were universal as a result of MOD planning or just on an ad hoc basis. If you can help please contact qaranc.co.uk


Paisley Thread Mill Museum hold over 100 of the transfers and pattern/leaflet packs for a variety of forces badges during the WW2. These were recently donated to them by Coats Craft UK when their design studios closed.

Examples of needlework done by a member of the forces can be seen at Upton House which is owned by the National Trust. The tapestry seats of the twelve chairs in the dining room were worked by Richard Samuel who became the 3rd Lord Bearsted, as occupational therapy after he was injured in WW2. They are conserved and on display today. For more information visit the Upton House website at www.nationaltrust.org.uk 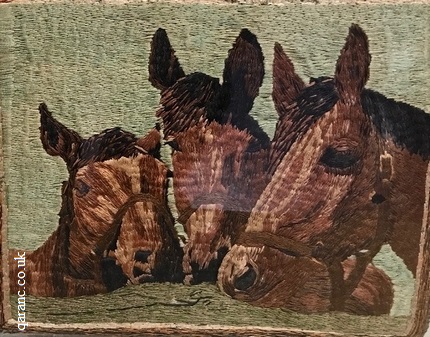 This piece of horse embroidery is from World War Two and was made by Charles Stannard whilst he was in hospital, recovering from malaria. He used a piece of an army shirt as backing. It is on display at the National Army Museum in Chelsea, London.