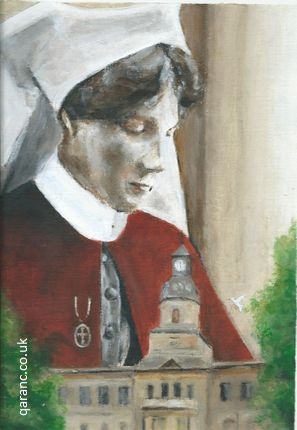 It has been rumoured for over a century that a Grey Lady ghost, said to be a World War One QA Nursing Sister who killed herself, haunts the wards of the former Cambridge Military Hospital. Over the years she has been sighted by patients and staff, and now the builders working on the renovations of this magnificent building have refused to return to the building after a series of strange occurrences. These include glimpses of grey seen in the corner of their eyes, overpowering smells of lavender and feeling watched. One burly worker, who did not wish to be named told us:

One evening I was suited up with protective gear, ready to help remove the asbestos and suddenly it went really cold. Normally I sweat buckets in that gear, but I was icy cold. I looked down the old ward on the top floor and I swear I could see an old fashioned nurse, bending over, as if a bed was there. It looked like she was tending to someone in a bed. It fair frightened me and I don't scare easy. I refused to return. Some of my mates have said the same.

We have been informed that Aldershot Supernatural Investigators, a team of enthusiast ghost hunters, have been called in and shall try and make contact with her through the use of their specialist equipment such as Electromagnetic field monitors, motion detectors and infrared and thermal imagery as well as a ouija board. Their head ghostbuster, Olaf Sproil, told us;

We are really excited to be doing this tonight. The Grey Lady is the most famous of ghosts in Hampshire and for years we've asked the MOD to allow us access to the buildings without getting any replies. Now we can finally get a chance to contact her and hopefully talk to her and ask questions. Perhaps we can even lay her to rest and see her safely across to the other side.

One of the conditions from the developers is that a member of the cloth be present so that the spiritual needs of the ghost can be delivered. Padre Caldwell, an army Chaplain, has agreed to be present and minister to any souls in need.

However C.G. Buswell, author of The Grey Lady Ghost of the Cambridge Military Hospital, thinks this is a step too far and that the builders should man up and get on with their jobs:


See also the Formation of the Nursing Brigade Announced.