The Army Medical School moved to a temporarily location in York Hospital in Chelsea in 1902 from the Royal Victoria Military Hospital Netley and then into Millbank College in 1907. Previously they also used Fort Pitt in Chatham. Soldier Magazine 6 October 1996 cites that the Royal Army Medical College Millbank London was built on the site of a prison, the Millbank Penitentiary. It opened in 1907 on the edge of the Thames. This was as a result of a recommendation of a Royal Commission after the Boer War. 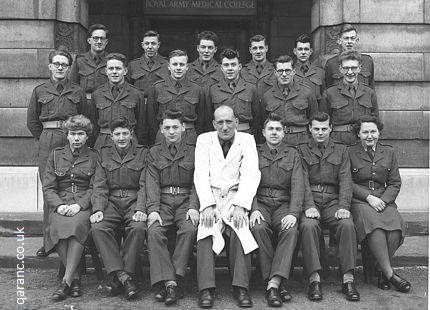 Laboratory Technician III course at Royal Army Medical College, Millbank 1st January to 30th April 1956, courtesy of Peter Elgar who can be seen in the front row, third from the right. The course was run by WO2 Baker who is in the white coat. The QARANC on the front left row had the wonderful name of Greta Birgitta Henshaw-Gibson.


During the Great War teaching was suspended and the building was used for the production of vaccines which included one against typhoid. Gas masks and chemical warfare protection research also took place during this time.

The building suffered damage during bombing in World War Two. Medical Officers were taught about tropical diseases during this era.

The first RDMC Commandant was Surgeon Commander Ian Jenkins who took over the building from Maj Gen George Cowan, the last Commandant of the College.

It is a Grade 2 listed building. The RAM College moved out in 1999 and the buildings are now part of the Chelsea College of Art and Design.

Friends of Millbank are a group with an interest in military medical history with the history of the Millbank site, namely the Queen Alexandra Military Hospital, No. 18 Company RAMC and the Royal Army Medical College. The Friends meet in the former Officers’ Mess and lectures on medical history takes place in the lecture theatre. All are welcome to attend. For more information visit the Friends of Millbank web site at www.friendsofmillbank.org