This article appeared in Soldier Magazine September 1979 to mark the centenary of the Cambridge Military Hospital, Aldershot which was opened on the 18th July 1879.

It discussed the history of the army hospitals in the area and why the CMH was built. It reports upon the first patients and why it was designed with a long corridor with separate wards. The origins of the Leishman laboratory and the Army Chest Unit are described, and there are photos of several QARANC ward stewardess and nurses with RAMC nurses and even a recent sighting of the grey lady ghost by a Night Orderly Sergeant. 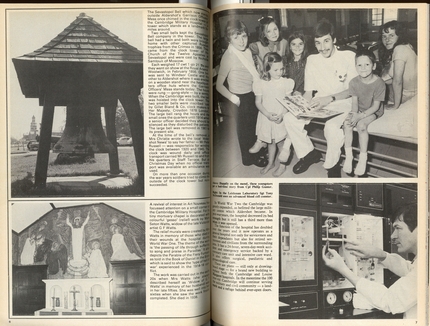 These pages describe the history of the bells and the relief murals of the mortuary chapel of rest. Interestingly, it ends the one hundred years celebration with news that a new hospital was being planned on the site of both the CMH and the Louise Margaret Maternity Hospital.

The pages are reproduced with kind permission of www.soldiermagazine.co.uk

The history of the Cambridge Military Hospital.